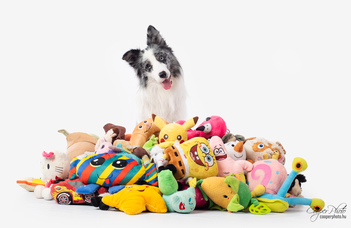 A new study just published in Animal Cognition reveals that the rare dogs that are gifted in learning object verbal labels – the names of their toys -  are more playful than typical dogs.

The researchers of the Department of Ethology at Eötvös Loránd University, Budapest recently found that only a few dogs worldwide show the unique skill of learning multiple object names – the name of their toys. These gifted dogs can learn names very quickly and remember those they have learned for over two months. The researchers called these dogs Gifted Word Learners.

The researchers of the Family Dog Project investigated

(i.e., dogs that do not show the rare capacity to quickly learn multiple object names).

In humans, the capacity to solve problems has been linked to some personality traits and it seems that more playful individuals may show a better problem solving capacity.

The researchers asked the owners of 21 gifted dogs from all over the world to fill the Dog Personality Questionnaire.

“This is a validated questionnaire that reveals personality traits in dogs and has been already successfully used in several published studies”, explains Borbala Turcsan, co-author of the study.

The data obtained about the personality traits of the Gifted Word Learners was then compared to data obtained with the same questionnaire on a matched sample of 144 typical dogs from two different countries, Austria and Hungary.

“We restricted our investigation to Border collies because most of the Gifted Word Learners belong to this breed”, explains Dr. Claudia Fugazza, leading researcher of the study.

“However, it is important to point out that the vast majority of Border collies does not show this talent”, points out Dr. Andrea Sommers, co-author of the study. “And also that there are some Gifted Word Learners that do not belong to this breed”, adds Shany Dror.

Ádám Miklósi, co-author and head of the Department of Ethology concludes:

“This study shows that there is a relationship between extremely high levels of playfulness and giftedness in learning object verbal labels in dogs.

However, it is important to note that this does not necessarily imply that playfulness is what makes this talent emerge. We do not exclude it, but it could also be that the extreme playfulness in the gifted individuals is driven or perceived by the owners as a result of frequent playful interactions with their dogs, with named toys.”

The ability to learn object names is very rare and dogs with this capacity are important for research. By studying these dogs, we can not only better understand dogs but also better understand ourselves. The researchers encourage dog owners that believe their dogs knows several toy names to contact them through the form on the Genius Dog Challenge website.