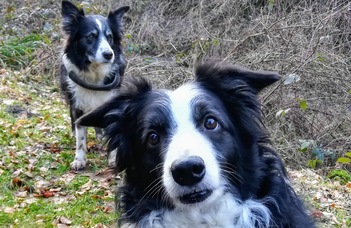 Dogs’ personality changes over time, but these changes occur unevenly during the dogs’ life, and each trait follows a distinct age trajectory, according to a study published in Scientific Reports by researchers from the ELTE Eötvös Loránd University, Budapest and the University of Veterinary Medicine, Vienna. The authors also identified some aged dogs with potential age-related impairments, which had very low problem orientation and extremely high levels of activity.

Human personality is characterized by a peculiar dualism: it is both stable and malleable, depending on the point of reference. If we compare ourselves to our peers, it is stable as our personality rankings relative to others remain consistent over time. However, personality changes became obvious if we compare ourselves across time, as people become more conscientious, more emotionally stable, and more agreeable as they get older.

But what about personality stability and change in dogs? “Even though dog personality is a highly popular topic in the literature, there are still gaps about the long-term stability, as well as about the dynamics of personality development. That is, if personality rankings remain consistent over several years, at what age personality changes most prominently occur, and how much dogs actually change throughout their life.” – explains Borbála Turcsán, first author of the study (ELTE, Department of Ethology).

To address these gaps, the authors investigated the personality of 217 Border collies across a wide age range (from 6 months to 15 years) using a comprehensive test battery known as the Vienna Dog Personality Test (VIDOPET). The researchers also invited the owners and the dogs back to the lab four years later, and tested 37 subjects again.

Associate Professor Friederike Range (Clever Dog Lab) describes why dogs were re-tested. “Longitudinal studies covering multiple years and using the same method at both time points are very rare in the dog literature. Following up the same dogs across ~4 years allowed us to address not only the question of personality stability, but also if there are individual differences in personality development, that is, if dogs with certain personality profiles change more than others.”

The researchers showed that dog personality also has a ‘stable’ component, the dogs’ ranks on all five personality traits remained fairly consistent across the investigated time period. So, for example, the most active individuals in the sample remained the most active 4 years later. However, individuals with a more ‘mature’ initial personality profile (that were less active, less curious and more oriented to problems) changed less in these traits than their peers - similar to what has been found in humans.

To investigate the general age-related changes in personality the researchers compared the personality of dogs belonging to seven age groups. “We found that dogs’ personality changes with age, and these changes occur unevenly during the dogs’ life course, just like in humans. Crucially, however, the dynamics of change seem to be specific for each personality trait.” – said Zsófia Virányi (Clever Dog Lab).

“For example, the Problem orientation trait, which describes the dogs’ attentiveness and ability to solve problems, changes largely during early life, increasing strongly until ~6 years of age,

after which further changes became negligible. In contrast, the Novelty seeking trait did not change markedly during the younger life stages, but ~3 years of age their curiosity about novel objects and situations started to decrease which continued until geriatric age.”

The Activity-independence of the dogs also decreased continuously over the dogs’ life course, but in this trait the most pronounced decrease occurred from puppyhood to adolescence (1-2 years of age). Not all traits showed such a marked change with age. For example, dogs showed only a small tendency to be better at tolerating frustrating situations as they aged, and the dogs’ level of Sociability seemed to remain constant throughout the dogs’ life course.

Interestingly, the authors also identified some aged dogs with potential age-related impairments, which had very low problem orientation and extremely high levels of activity. “By describing in detail the normative patterns of personality development throughout different life stages, our study can help in the identification of age-related impairments”. – explained Enikő Kubinyi, principal investigator at the Senior Family Dog Project (ELTE), supported by an ERC grant. “Dogs are already recognized as a natural model for human cognitive ageing, and our results suggest that similar rules govern the age-related changes in both human and dog personality.”