Who am I hearing? - Species differentiation in dogs revealed by non-invasive EEG 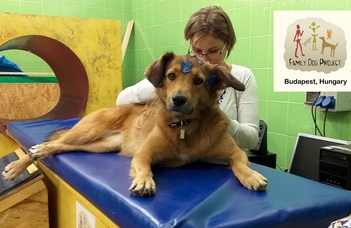 New insight has been gained into the neural processing of auditory information in dogs, revealed by researchers at Eötvös Loránd University (ELTE) in Budapest. In their new study published in the journal Royal Society Open Science, they used a non-invasive EEG paradigm (based on human methods) to study how dogs process different auditory signals and found differences in the responses to human and canine sounds for the first time.

By hearing the voice of two different, familiar species, we humans are usually able to tell the sounds apart based on the species it came from.  But can dogs do that? Researchers from the Department of Ethology at Eötvös Loránd University (ELTE) undertook to detect the brain processes responsible for species differentiation in a recently published study.

“We played various human and dog vocalizations to lying, alert dogs while recording their brain activity using non-invasive EEG” – said Anna Bálint, fellow of the MTA-ELTE Comparative Ethology Research Group – “This new EEG methodology was recently developed by Hungarian researchers based on human procedures and is completely pain-free for the subjects, contrary to many other EEG paradigms used in animal studies.”

“The analysis of the recorded  EEG signals showed that the dog brain processes the vocalizations of the two species differently.

This is the first time this has been detected in this form in dogs” – explained Huba Eleőd, doctoral candidate at the Department of Ethology, ELTE  – In addition, this differentiation effect occurs very soon, at 250 milliseconds, so the neural processing of human and dog sounds diverges already a quarter of a second after the onset of the sound.”

“Another important finding is the difference between the brain responses to positive and neutral vocalizations depending on the species” – highlighted Márta Gácsi, principal investigator of the MTA-ELTE Comparative Ethology Research Group – “So we've been able to experimentally show that the dogs’ brain also responds to the emotional content  of the sounds they hear."

“The main merit of these findings is that by using this methodology,  we can gain insight into new details of the neural functions of our four-legged friends and how they process the acoustic signals of the world surrounding them” – concluded Anna Bálint.

This study was published in the Royal Society Open Science under the title “Differences in dogs’ event-related potentials in response to human and dog vocal stimuli; a non-invasive study”, by authors Anna Bálint, Huba Eleőd, Lilla Magyari, Anna Kis and Márta Gácsi. This research was funded by the National Research Development and Innovation Office, Hungarian Academy of Sciences, Ministry for Innovation and Technology as well as BIAL Foundation.

Cover picture is made by Huba Eleőd.