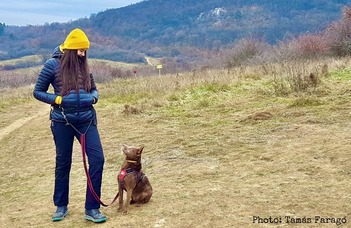 Eye contact plays a fundamental role in human communication and relationships. When we look into each other's eyes, we show that we are paying attention to each other. However, we do not only look at each other but also at our four-legged companions. According to new research by Hungarian ethologists, at least four independent traits affect dogs' ability to establish eye contact with humans. Short-headed, cooperative, young, and playful dogs are the most likely to look into the human eye.

Dogs adapted uniquely well to live with humans, and communication plays a vital role in this. They are sensitive to the direction of the human's gaze, which helps them decide whether the message is directed to them. Forming eye contact with the owner raises oxytocin levels in both parties, which plays a role in developing social bonding. However, individual dogs are not equally prone to make eye contact; the anatomy of the eye, the original function of the breed, i.e., the task they were bred for, age and personality might also affect the tendency to form eye contact.

"One hundred and thirty family dogs were examined at the Department of Ethology, Eötvös Loránd University. We measured the length and width of their heads because this is related to their vision." - said Zsófia Bognár, Ph.D. student, first author of the study, published in Scientific Reports. "The boxer, bulldog, pug, and snub-nosed dogs, in general, have a more pronounced area centralis in the retina, so they can better respond to stimuli in the central field, which may make it easier for them to form eye contact with humans."

In contrast, long-nosed dogs, such as greyhounds, see a wide panoramic image because the nerve cells that process the visual information distribute more evenly in their retina. Therefore, if they have to focus on the center of their visual field, they may be distracted by visual stimuli from the periphery more easily.

In the behavior test, the experimenter first initiated play with the dog. In another test, she measured how quickly and how many times the dog formed eye contact with her within five minutes. "The experimenter did not speak and remained motionless until the dog looked at her. Every time the dog looked at her, she rewarded this with a treat. Meanwhile, the owner sat on a chair, silent. We measured how much time elapsed after eating the treat until the next eye contact." - presented the test Dr. Dóra Szabó, ethologist. See the video summary of the research here.

It turned out that the shorter the dog's nose, the faster it made eye contact with the experimenter. "It is likely, that they see the human face more sharply because of their special retina, but it is also possible that their owners gaze at them more often as their facial features resemble a small child, a powerful cue for humans. Because of this, dogs with shorter noses may be more experienced in making eye contact." - explained Zsófia Bognár.

The researchers also examined whether the original role of the breeds still influenced eye contact forming. Shepherd dogs, for example, are visually cooperative who follow the direction of the owner's hand (stick) during their work with the stock. In contrast, visually non-cooperative sled dogs running in front of the musher can only rely on vocal cues, while dachshunds also cannot see their owner in the underground life-and-death struggle. Long- and short-headed dogs evenly distributed across the different breed groups.

As expected, dogs bred for visually guided work made eye contact faster than those driven by voice or selected for independent work. Surprisingly, the mixed breeds performed similarly well, even though 70% were adopted from a shelter. Perhaps their willingness to make eye contact even helped them to get adopted in the first place.

"We assumed that aging dogs would find it more difficult to control their attention and would be slower to switch from eating to looking at the face of the experimenter. That's what happened. Since we pre-screened our participants for potential visual and auditory impairments, the slower establishment of eye contact seems to be a natural consequence of aging." - says Dr. Eniko Kubinyi, the leader of the project.

This research emphasizes the fact that many factors affect the way dogs and humans communicate. It also sheds new light on our knowledge of short-nosed dogs. Many researchers, including Konrad Lorenz, suggested that these dogs were selected for their baby-like facial appearance. However, it is also plausible that people preferred individuals that were more attentive to them and looked at them for a longer duration, facilitating communication.