Fish and humans: a new approach to Bloom syndrome research 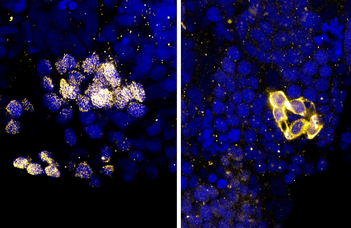 Researchers at Eötvös Loránd University (ELTE) have created a new disease model that has contributed to a better understanding of Bloom syndrome and the sex determination processes of zebrafish. The study, linking two seemingly unrelated topics, was carried out by the research teams of Mihály Kovács (Department of Biochemistry) and Máté Varga (Department of Genetics) and published in the scientific journal Cell Death and Disease. In addition to providing important information on the cellular effects of Bloom syndrome, the new model could contribute to the development of compounds capable of mitigating symptoms and thus improve the quality of life of people living with the disease.

Bloom syndrome is a rare hereditary genetic disease characterized by short stature, reduced fertility, reddish lesions on the skin upon being exposed to sun and increased risk of cancer development leading to premature death.

The cause of the symptoms is the malfunction of a single gene which was also named Bloom, as was the protein which it encodes.

Bloom and the four other members in its protein family are involved in a multitude of cellular processes responsible for DNA integrity maintenance, moreover their roles often overlap, making the task of studying the syndrome equally considerably challenging and necessary. The importance of uncovering the functional roles of Bloom is further compounded by the fact that via its inhibition the survival and growth of certain cancerous cells might be hindered.

Owing to their complexity, it is beneficial to examine diseases such as Bloom syndrome not just using cell cultures and computer models, but also by involving whole organisms. There are various vertebrate (African clawed frog, house mouse, brown rat, domestic rabbit) and invertebrate (roundworm, fruit fly) animals used in ‘in vivo’ studies worldwide. In the past decades zebrafish also became a prime member this group.

Zebrafish as a disease model

It serves as their advantage that they are easy to keep, relatively small and produce many rapidly growing offspring that develop outside of the bodies of the parents. Although at first glance they vastly differ from humans, their genetic material is remarkably similar as is shown by the fact that 82% of the genes associated with human diseases have zebrafish counterparts. Bloom is one such gene, thus allowing researchers to create mutants in order to study the symptoms of the mutation.

Fluorescent microscopy images of healthy (left) and Bloom mutant (right) testes. Cell nuclei are shown in blue, a key protein of division in reproductive cells (Sycp3) is shown in yellow. In healthy testes the protein localizes to the nuclei, where it can fulfil its role, whereas in mutants it accumulates around the nucleus. The latter phenomenon was previously linked to cell death in rats.

"The disease model established by our researchers showed marked similarities to human Bloom syndrome, however a number of species-specific novelties were also uncovered. The first such result is that early development of zebrafish was not hampered by the absence of the Bloom protein, moreover there were no observable differences between Blm-deficient and healthy fish even after they were subjected to DNA damaging treatments. It is likely that this was due to the absence of Bloom being compensated for by other proteins of Bloom’s family in young individuals" - mondta Tamás Annus, the first author of the publication, PhD student at the research group DanioLab at the Department of Genetics at Eötvös Loránd University.

However, this compensatory effect is not complete as according to a years-long lifespan analysis much like Bloom syndrome afflicted humans, zebrafish also live shorter lives. Upon analysis of fertilization success, it was also discovered that like humans, mutant zebrafish exhibit reduced fertility compared to their healthy fellows. This effect however could only be studied in male fish, as an additional curiosity of the mutant population was that it was entirely comprised of males. Total sex bias in zebrafish mutants is not a rare phenomenon, but to understand it we need to say a few words about the determination of the sexes in this species of fish.

Unlike zebrafish living in the wild, domesticated laboratory zebrafish strains do not have sex chromosomes: in their absence development of the sexes is regulated by the combined effects of a multitude of genes scattered across the genome as well as environmental factors. These processes converge in the regulation of the number of the reproductive stem cells that have not yet been committed to developing into eggs or sperm cells. If the number of these cells reaches a critical threshold during a certain phase of development the individual will develop as female, otherwise as male.

In the absence of proteins responsible for DNA integrity maintenance these cells cannot multiply to the quantity required for female development even if it was possible according to the above-mentioned factors, resulting in all Bloom mutants becoming males. As an additional consequence of the mutation the production of sperm cells is also impaired leading to drastically reduced fertilization success compared to healthy fish.

"In the future this model may provide additional valuable information about the regulation of the processes necessary for zebrafish sex determination and the cellular effects of Bloom syndrome which in time might even contribute to improving the quality of life of the people living with this disorder via development of compounds capable of mitigating symptoms." - Tamás András summarized the results.

In the project, which was funded by the National Research, Development and Innovation Office laboratories of the Department of Genetics and the Department of Biochemistry joined forces with their colleagues at the Eötvös Loránd Research Network Institute of Enzymology and the Hungarian University of Agriculture and Life Sciences.