Differences in the dog-owner attachment are reflected in dogs’ sleep 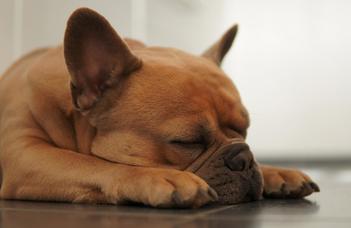 Researchers of the Department of Ethology at Eötvös Loránd University, Hungary, provided the first evidence that the sleep pattern of dogs who slept in a new place with their owners was influenced by the dog-owner attachment bond. The study was published in the journal Animals.

Many dog owners could tell you how much their dog is attached to them. Attachment is an important behavioral regulatory mechanism that has been shown to be functionally similar in the child-mother and dog-owner relationships.

"The owner provides ‘safe haven’ for the dog in dangerous situations, just like the mother does for young children.

If we want to use the dog as a model for human behaviour,

and we do, it is important to know whether this similarity is also evident at the level of behaviour in our everyday activities. Last year, we discovered in an fMRI study that the dog’s attachment influences how rewarding it feels when it hears its owner's voice. The current result is another important similarity in the mother-child context," said Márta Gácsi, senior researcher of the MTA-ELTE Comparative Ethology Research Group.

The dog-owner attachment bond has already been studied in a number of behavioral tests; this time the researchers wanted to know whether in dogs, similarly to children, attachment has an effect on the quality of sleep in a new environment.

The answer was sought by parallel studies of the attachment behavior and sleep EEG of dogs. The attachment bond of 42 dogs to their owners was measured using the adapted version of the Strange Situation Test, developed by psychologists to assess human infant-mother bond. Dogs’ sleep was examined during an afternoon nap with the owner in an unfamiliar place, in the University’s sleep lab, using a completely non-invasive electroencephalography (EEG) method (similar to that used in humans).

"Sleep plays an important role in processes such as learning, emotion processing and development. When a human (or dog) sleeps, it is important to sleep 'well', so restfully. The quality of sleep can be measured by different parameters, for example, by sleep fragmentation or the length of deep sleep.

We were interested in how the dog-owner bond influences sleep quality."

Researchers found higher attachment scores to be associated with spending more time in deep sleep, known as the most relaxing sleep phase. “Sleeping in a new place for the first time can be stressful. But these results suggest that

presumably because the owner of these dogs provides a more secure environment for their dog, thus they can relax and have a good nap” – explains the first author of the publications, Cecília Carreiro.

This study was published in the journal Animals entitled “Attachment towards the owner is associated with spontaneous sleep EEG parameters in family dogs”, written by Cecília Carreiro, Vivien Reicher, Anna Kis and Márta Gácsi. Link to the original publication: https://www.mdpi.com/2076-2615/12/7/895